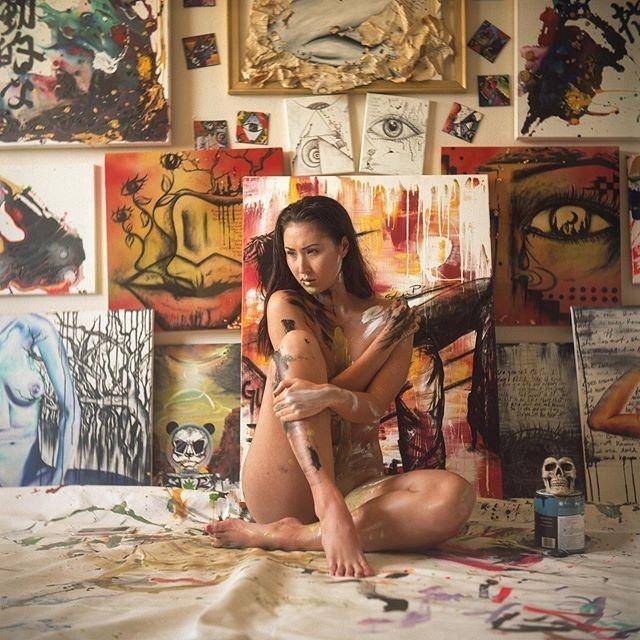 Shei Phan’s work has been described as both striking and prismatic, employing a stochastic method of painting where chaos meets formula. By utilizing an array of disparate media and subjects, she conveys the fantasy derived from her vivid dream states as a form of personal therapy. While her preferred medium is oil on canvas, she is also a skilled sculptor, crafting clay, wire and metal materials to explore other dimensions of her subconsciousness, coalescing the many facets of her creativity.

Her individual pieces each elicit inexplicable and varied emotions creating an experiential journey into her soul. Her technique, rooted in surrealism, manipulates an acutely fine sense of color, texture and space to an almost photographic quality, often drawing from her own portfolio as a model as the subject.

From the age of twelve, Shei began refining her talents as an artist and sculptor, and eventually as a model, would expand her awareness of light, composition and form. Her career in modeling would lead her to become the first mixed Asian female and top five finalist of America’s Next Top Model bringing her recognition and a global following. It allowed her to discover a new form of creativity through the manipulation of her very self and body in photography, yet left her yearning to express a voice lost in the static image. It would become the impetus for an exploration of concept creation, not limited to being in front of a camera, realized through an entirely new interactive body of work.

I’ve been doing art all my life, but my art teacher in 7th grade is only pushed me to explore my talents! And it was history after that!

Salvador Dali is a big inspiration, he paints from his dreams and that is what I do as well. My dreams and nature plays a huge part in my art and their stories.

College Collections is an amazing team that will help me spread my message as an artist!

My greatest achievement is when I was able to do my first solo show in New York and it was a success. Not only did I sell pieces but that amount of love and interested I received was beyond what I expected. Everyone really took in each and every story from each priced. Allowing them to connect and explore their own imaginations.

My vision for the future is to continue telling my story in larger and larger scales as time moves forward. Allowing my audience to really walk into a piece and read the story. Immersive art shows!

Added to your cart: